Balance, representativeness and comparability are ideals which corpus builders strive for but rarely, if ever, attain. In truth, the measures of balance and representativeness are matters of degree. V´aradi (2001) has been critical of the failure of corpus linguists to fully define and realise a balanced and representative corpus. Even proposals, such as those of Biber (1993), to produce empirically determined representative corpora have not actually been pursued.Biber’s proposal for representativeness to be realised by measuring internal variation within a corpus – i.e. a corpus is representative if it fully captures the variability of a language – has yet to be adopted in practice. It is also only one of many potential definitions of representativeness, as Leech (2007) points out.
However, though balance and representativeness remain largely heuristic notions, decided on the basis of the judgement of linguists when they are building a corpus, this does not mean to say that the concepts are of no value. Similarly, while some corpora designed to be comparable to each other can clearly make a claim for balance and representativeness, others may only do so to a degree. Leech (2007: 141–3) usefully summarises a series of problems encountered in building comparable corpora of British English to explore diachronic variation: notably, problems relating to the evolution over time of the genres that are balanced in those corpora. The changing nature of genre makes claims of comparability when looking at diachronic variation much more tendentious than similar claims for the synchronic Brown/LOB comparison, for example.

Given what has been said about total accountability, you may wonder that analysts would ever approach a corpus seeking a single example, or a subset of carefully selected examples. Not only do some analysts do just that, in certain circumstances it may actually be the right thing to do. Indeed, in an important sense, approaching a corpus in search of a specific type of result may be entirely in line with the scientific method.

Positivism was the dominant epistemological paradigm in social science from the 1930s through to the 1960s, its core argument being that the social world exists externally to the researcher, and that its properties can be measured directly through observation. In essence, positivism argues that:

• Reality consists of what is available to the senses – that is, what can be seen,smelt, touched, etc.

• Inquiry should be based upon scientific observation (as opposed to philosophical speculation), and therefore on empirical inquiry.

• The natural and human sciences share common logical and methodological principles, dealing with facts and not with values.

Hence, ideas only deserve their incorporation into knowledge if they can be put to the test of empirical experience. Positivists saw the natural sciences as progressing through the patient accumulation of facts about the world in order to produce generalizations known as scientific laws.To achieve this, the act of scientific inquiry was taken to be the accumulation of ‘brute data’ such as shape, size, motion, etc. For positivists, then, both the natural and social worlds operated within a strict set of laws, which science had to discover through empirical inquiry.This is a brief summary of positivism, but, as Bryman (1988) notes, there have been many different versions of positivism which overlap, and which rarely agreed precisely on its essential components.

Phenomenology holds that any attempt to understand social reality has to be grounded in people’s experiences of that social reality. Hence, phenomenology insists that we must lay aside our prevailing understanding of phenomena and revisit our immediate experience of them in order that new meanings may emerge. Current understandings have to be ‘bracketed’ to the best of our ability to allow phenomena to ‘speak for themselves’, unadulterated by our preconceptions. The result will be new meaning, fuller meaning or renewed meaning.

It is worth having a brief overview of critical inquiry because it offers quite a different perspective to positivism and interpretivism. This critical form of research is a meta-process of investigation, which questions currently held values and assumptions and challenges conventional social structures. It invites both researchers and participants to discard what they term ‘false consciousness’ in order to develop new ways of understanding as a guide to effective action. In a Marxist sense, the critical inquiry perspective is not content to interpret the world but also to change it.The assumptions that lie beneath critical inquiry are that:

-Ideas are mediated by power relations in society.
-Certain groups in society are privileged over others and exhert an oppressive force on subordinate groups.
-What are presented as ‘facts’ cannot be disentangled from ideology and the self-interest of dominant groups.

Mainstream research practices are implicated, even if unconsciously, in the reproduction of the systems of class, race and gender oppression. Those adhering to the critical inquiry perspective accuse interpretivists of adopting an uncritical stance towards the culture they are exploring, whereas the task of researchers is to call the structures and values of society into question. 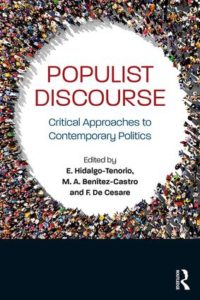 So happy to contribute to this volume on populist discourse:

The volume has been edited by Edited by Encarnación Hidalgo Tenorio, Miguel-Angel Benitez-Castro and Francesca De Cesare.

2nd International Conference on the Sociolinguistics of Immigration

Rapallo (Italy), September, 22-23, 2016
The aim of the Conference is to focus on epistemological and methodological continuities and discontinuities in the sociolinguistics of immigration. Several new researches and approaches have begun to emerge in the last few years: translingualism, polylanguaging, truncated repertoires, crossing metrolingualism.
Two main processes have contributed to this change: the epistemological orientation towards postmodernist and critical social theories within sociolinguistics as well as applied linguistics, linguistic anthropology and related disciplines and globalization.
The focus of attention of the 2nd International Conference of the Sociolinguistics of Immigration is to explore these research orientations, whilst also aiming to critically discuss these and any (dis)continuities and/or potential links between “old” and “new” orientations.
The confirmed plenary speakers will be: A. Creese and A. Blackledge (University of Birmingham) and M. Hundt (University of Zürich).

Abstract Submission
Each abstract should not exceed 500 words (incl. at least four keywords and references). Text should be justified and single-spaced (font size: Times New Roman 12pt).
Name, affiliation, and e-mail address should be on separate first page of the electronic copy.
Every individual presentation will last 20 minutes (plus 10 minutes for discussion and questions).

Further details on the conference can be found at: http://www.dipartimentolingue.unito.it/slimig2016/oss-home.asp Please send an abstract of 300 words (excluding references) attached to an email to Charlotte Taylor (charlotte.taylor@sussex.ac.uk) or Melani Schröter (m.schroeter@reading.ac.uk). The abstract should be anonymised, but please include in your email your name, institutional affiliation and preferred email address for correspondence with the panel organisers.
Submissions need to be received by 30 November.