So far it has yielded inconclusive results.

Spada & Tomita (2010): meta analysis on the complexity of target feature on effectiveness of L2 construction

Definitions are varied and not consistent

Most studies show no construct definition and as a result complexity is often not explicitly defined as a theoretica lconstruct. Instead it usually is operationalised as a statistical construct either by means of raters or quantitative mesures of selected features. 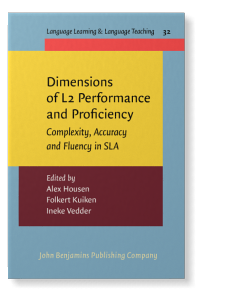 Only 3 measures are used in more than 5 studies (MLTunit + MLS, D + Guirault)

Motivation for the choice of complexity measures is not specified.

What units are being used?

Norris & Ortega (2009): Towards an Organic Approach to Investigating CAF in Instructed SLA: The Case of Complexity

The challenge is to bring more clarity and identify the meanings and conceptions of L2 complesity that are relevant for investigating and understanding the nature of L2 structures and L2 systems.

Structural L2 complexity vs Cognitive L2 difficulty: may lead to a property theory in SLA

The range, variety, or diversity of words found in learners’ language use is believed to reflect the complexity of their vocabulary knowledge as well as the level of their language proficiency. Many indices of lexical diversity have been proposed, most of which involve statistical relationships between types and tokens, and which ultimately reflect the rate of word repetition. These indices have generally been validated in accordance with how well they overcome sample-size effects and/or how well they predict language knowledge or behavior, rather than in accordance with how well they actually measure the construct of lexical diversity. In this article, I review developments that have taken place in lexical diversity research, and also describe obstacles that have prevented it from advancing further. I compare these developments with parallel research on biodiversity in the field of ecology, and show what language researchers can learn from ecology regarding the modeling and measurement of diversity as a multidimensional construct of compositional complexity.